I hate it when I have to start a story with the following fragment, but back when I was a teen or in my early 20s (ugh) I thoroughly enjoyed playing first person shooters. I took pleasure in playing games like Call of Duty, Halo, or Medal of Honor. I even loved playing Goldeneye on my N64.

Speaking of my N64, there was one game I was just constantly entertained by, and that was Perfect Dark. This game had a really cool storyline for its time, amazing single player and multiplayer environments, and, my favourite part, the ridiculous guns that could do numerous things. Now I know there are a ton of games these days that have pushed the boundaries of FPS gaming and they probably have super detailed environments, creatively designed weaponry and have most likely have surpassed their predecessors, but there’s something about Perfect Dark that always brings me back this sense of nostalgia.

Now that I’ve been focusing more on tabletop gaming, I haven’t had the opportunity to recently play any FPS games. And if I were to try these games now, I would probably lack the coordination to even be able to take down a basic enemy.

So it’s nice to know that one designer took the elements that I enjoyed from playing FPS games such as the deathmatch style arenas,  the tactical warfare, and the ridiculous guns and convert these things into a board game. 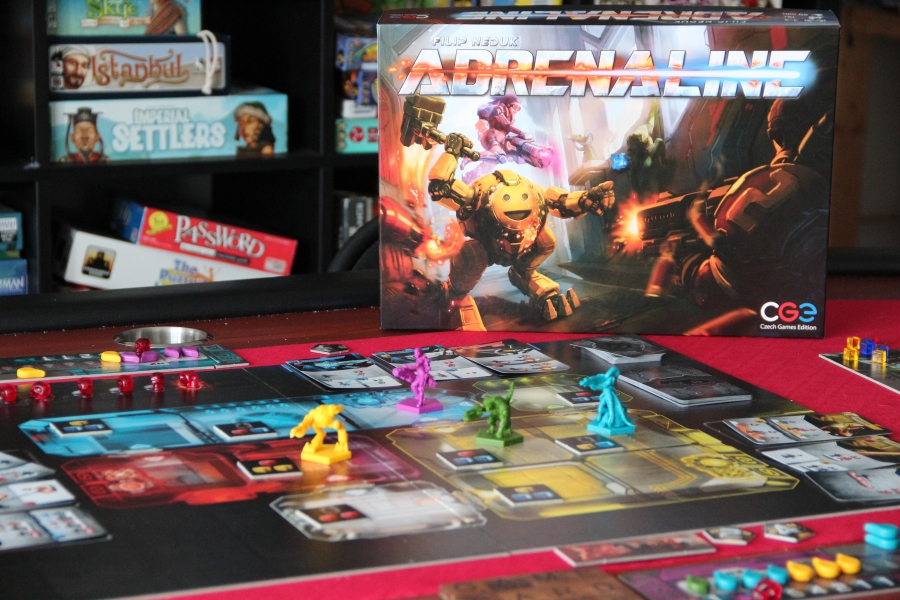 Adrenaline is a 2-5 player game created by Filip Neduk and published by Czech Games Edition. In this game you take on the role of one of five combatants who are trying to take down their opponents using tactics and advanced weaponry in a battle arena. Players will scour the rooms, looking for guns, melee weapons, and ammunition before finally attacking their opponents. The player with the most victory points wins the game.

In the setup, the board can be configured in four different ways because the halves are double-sided. Choose whatever configuration you like and place the halves together on the table. Also put three weapons on each of the spawning points, the ammunition tiles on all the other spaces and the powerup cards in their location. Each player also takes a plastic miniature, a player board, and their pile of blood drop tokens and you’re ready to go. 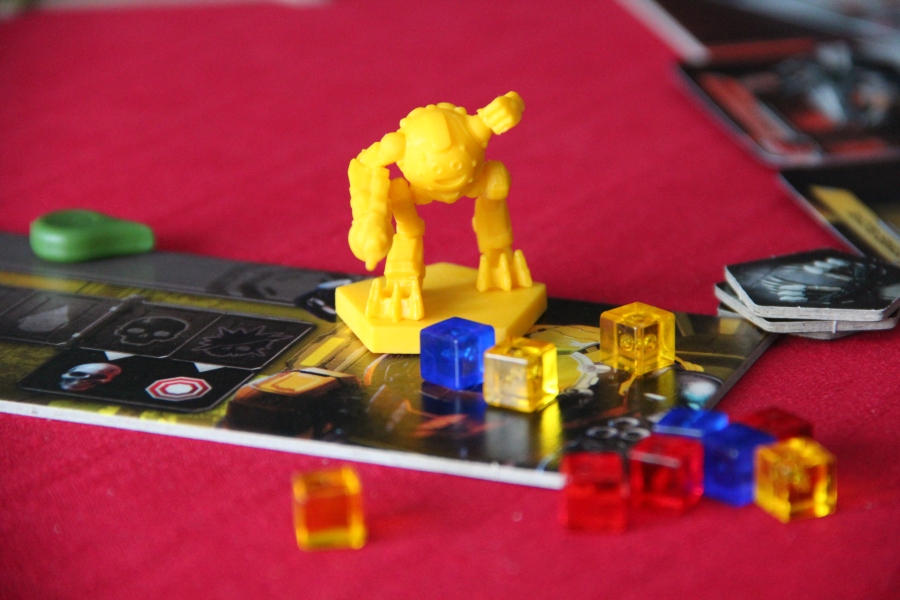 On your first turn,  you will determine your spawning point by drawing two powerup cards. You can choose one card to discard and the other to keep, and the colour on the card you get rid of will determine where you spawn to start the game. Once you’re on the board you can take two of three possible actions:

At the end of your turn, you then have the option of reloading your weaponry by paying the costs indicated by the card. This allows you to put the card back in your hand, indicating that you’re “locked and loaded”. Then it is the next player’s turn to go.

The majority of the game relies heavily on whether or not you can see and shoot the target, and what kind of damage you can deliver based on the weapon you have. Just like an FPS, and I know this sounds obvious, your ability to do damage to a target is dependent on whether you can see the target, or if you’re in range. There are specific rules that talk about your sight in the game. Essentially, you are able to see anybody in the same room as you, or anybody in an adjacent room provided that you are next to a doorway (the game describes it as if you were peeking in through the doorway to see the other room) . And with most of the guns’ abilities, if you can see them, you can shoot them.

The other factor is the weapon you have. There are 21 unique guns and melee weapons that you can use, each with its own abilities. Some weapons, if you spend more ammunition activate a secondary ability. All of which can shoot different targets in different ways depending on where you are positioned, and who you can see. For example, in the picture below: 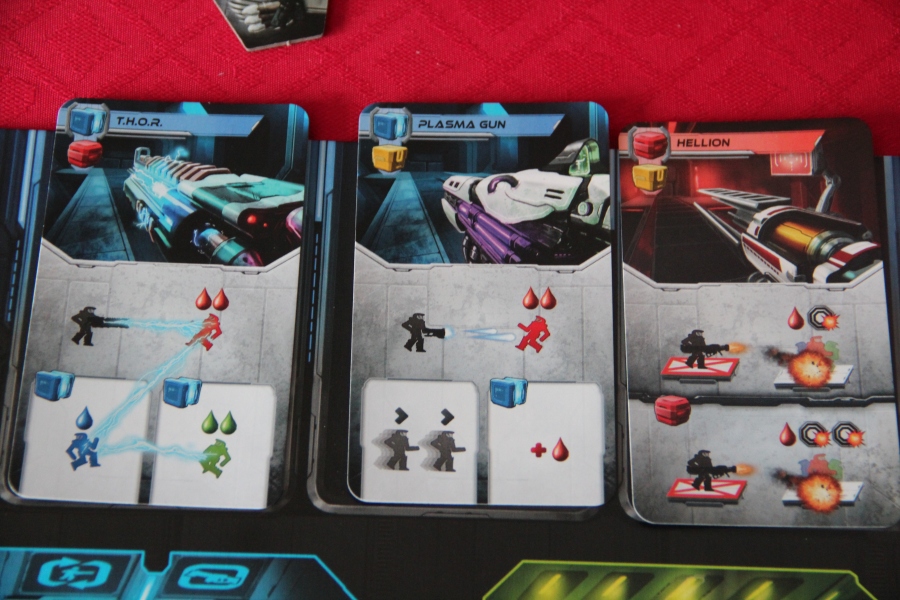 the plasma gun let’s the player do two damage to a player they can see. If you paid another blue cube then the gun does an additional damage. It also let’s the player make two movements as well. T.H.O.R. on the other hand let’s the player hit a person they can see for two damage, but for an additional blue cube will hit another person that the original target sees, and for one more blue cube, can hit a third person if the second person can see that person. Some guns, like the Hellion can also deal marks to another player. Think of a mark as an attack boost. If you are able to attack that same player again, then those marks will become damage points against that player.

In the end, you are trying to put your damage counters on other targets, because that’s how you get the points. You earn a bonus point for being the first person to do damage to the target. Once the target has received 11 damage counters, any players who had done damage to that target will get points. The player who dealt the most damage will get the most points, and the points earned decreases for every other player. If a player does more damage than required, than that person has gotten an overkill and will receive a mark from the target player. Think of it as revenge for doing too much damage. Once a target has died, that player now becomes less valuable for other players to kill by reducing the number of points you get for beating that target, but they respawn back onto the board by using one of their powerup cards to determine their spawning location.

The end game is triggered when eight deaths have occurred. This is symbolized by taking the skull tokens off the kill track, and replacing them with the counters of the player who killed the target. At this point final scores are tallied, unless you decide to incorporate the final frenzy, in which each player gets one final turn to do damage. Bonus points are also awarded to the player who gave the most kill shots. The player who got the most victory points is declared the winner.

There is so much that I’m liking about Adrenaline. I want to first talk about the shooting mechanic. Although this game is simulating an FPS, if you scrape it down to its bare bones, it’s really just a resource management and a territorial expansion game. Think about it. You are moving around collecting ammunition or resources of different colours so you can spend those tokens on abilities. Then you are using these abilities to put blood drops of your colour on other player mats indicating that you have a proprietorship. Really, Adrenaline is just a territorial expansion game with moving territories. And just like with any territorial expansion game, you want to be able to stake a claim on as many territories you can in order to get points. So you look at your arsenal of weaponry and decide which guns would efficiently deal damage to all the other players.

Does that mean that Adrenaline is dull because it follows the same boring mechanic as other territorial expansion games? ABSOLUTELY NOT! Adrenaline is done thematically well; you feel like it’s an in-your-face deathmatch (especially when you start playing it with the Halo Soundtrack in the background). With one group of friends I had the opportunity to play with, one friend commented, “I can imagine you using your sledgehammer to smash my character to the ground, and then using your tractor beam gun to bring him back to you and kill him. And then the others just started to rain bullets on you while you stood in the center of the room…classic.” While I was not impressed with the verbal jab, I was impressed by how Adrenaline takes a simple mechanic and makes it intense and fast-paced. I also like how once you’re dead, you become less valuable for being a target when you spawn back onto the board. This deters players from targeting the same person over and over.Strategically, you want to do enough damage to each player so you can at least score points, and even time your attacks perfectly so that you can end up with the killshot.

The game has also some amazing components. The artwork found throughout Adrenaline is well done. The plastic miniature figurines are sturdy and highly detailed as well as the board and player mats. I also like how the designer chose blood drop tokens to represent damage and acrylic cubes for the ammunition.

Adrenaline is also very customizable. You can choose how the game ends. You can either let the game end when eight killshots are made, or you can give every player one more turn in the “final frenzy”. In addition to the regular deathmatch style game, you can also play “domination mode” which is similar to king of the hill. There is also a “turret mode” which allows players to set up turrets to shoot other people. If you have just three players, you can add a bot that each player can take control of, and that bot can do damage as well.

As I mentioned, the game comes with 21 unique weapon cards. Because each weapon has a different set of rules, the game comes with a weapons manual to explain how each one works. In your first few games, you will often be going to this manual to understand how the weapon operates. This is where my only negative comes from. Adrenaline steers itself more towards avid gamers. If you are not used to understanding symbology quickly (or even at all), the weapon cards will look like complete jargon to you and you will often have to read the weapon manual to figure out what the cards do. This becomes worse at the beginning of the game, when you have nine weapon cards at the start to look at. Most of your time is going to be studying these nine cards first and then identifying which gun would best suit your strategy, if you even one. Most of the time, players will just choose any random gun if it is their first time playing and adjust accordingly. If you can get over this hurdle of understanding the symbols on the card, the game runs pretty smoothly.

Adrenaline is a great take on the FPS. I find the game to be fast-paced, that is of course if you are able to get through the weapons manual and understand how each card works. The game is also very versatile because of how the arena can change, and which game mode you want to play. To those who are have come from a video game background and have played an FPS in their day, Adrenaline is definitely a nice segue from video games to the tabletop world and is definitely a game I recommend you play.