Spiels De Jahres. It has been one of the biggest indicators for me as to whether or not I should purchase a game. In German, it translates to Game of the Year and recognizes excellence in board game design. A good chunk of my games in my library, and even ones I’ve written about in this blog have won or have been nominated for this prestigious award. These include The Game, Machi Koro, Camel Up, and Concept.

Recently, there was an article that was posted to my Flipboard saying who had won the Spiel De Jahres. I immediately checked the article out. I wanted to see which games I own and compare them to the 2016 nominees and winners. After reading the article, I was a little stunned by the outcome. The game that won “Kennerspiel De Jahres” (Connoisseurs’ Game of the Year)  was Isle of Skye, a game that I didn’t even know existed. The other nominees, T.I.M.E. Stories and Pandemic Legacy, I gave high praise for in this blog for its highly creative gameplay, beautiful artwork, and great storylines. I wondered, how did this game beat out two great games. I had to check it out for myself. 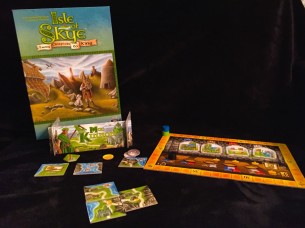 Isle of Skye: From Chieftain to King is a tile placement game created by Andreas Pelikan and Alexander Pfister. Each person acts as a Scottish leader and is trying to take control of the land. Points are earned by completing random objectives, which are laid out at the beginning of the game. The player who earns the most points is King of the Isle.

When you first look at the game, some may immediately think that it’s a Carcasonne knock off. In a cloth bag are a variety of square tiles and each tile has different landscapes, structures, scrolls, and whiskey kegs, all of which are useful in earning either points or money. The placement of tiles follows the same rules as Carcasonne in that the landscape edges of one tile have to match up with the edges of another and the way you position the tiles will determine how many points you can potentially get. 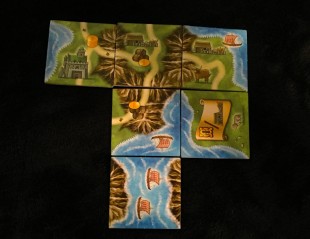 That is probably the only commonality between Carcasonne and Isle of Skye. Isle of Skye has many more game mechanics that surpass its Carcasonne brother. For one, each player plays on their own tile landscape, as opposed to playing on one communal area. Tile acquisition is also very different. Normally in Carcasonne, players grab a tile from the bag, place it on the layout, and then pass the bag to the next player. Isle of Skye allows players to grab three tiles, scrap one of them, and then price them for their opponents. Players price the tiles by using their own coins; if their opponents buy the piece, they get the profits and their own coins come back, but if no one purchases the tiles, the player must purchase them. This, to me, is a very interesting mechanic in a game. You need to really consider 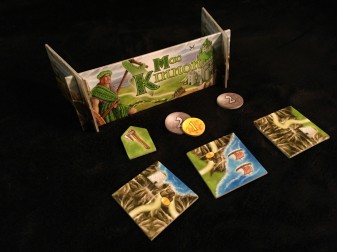 the prices that you set for the tiles. If you price too low, then you won’t get much profit out of the tile and your tile can be easily snatched by your opponents. If you price too high, you may have to pay a hefty amount of coins just to keep one tile. Sometimes, I considered pricing valuable tiles a decent price so I could get a fair bit of money, while other times, I wanted to scrap a tile altogether so that I would be the only one getting points from a certain objective. 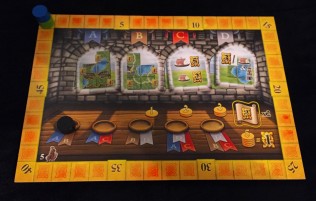 The other thing that players also need to consider is the different objectives that are scored in each round.Four different objectives are randomly drawn from a pile, and each objective is scored three times in a game. To get points right out of the gate, players need to look at buying tiles that heed to the first few objectives. But players also have to examine the latter rounds, and buy tiles that get those objectives as well. This game requires players to not double dip on one area, but to be flexible and explore all the ways in obtaining points. The setting of prices in combination with the objectives allow for certain tiles to be more valuable and players have to effectively use their money. These elements give Isle of Skye a high replay value; no two games will ever be the same, and your styles and strategies in playing will change each and every time.

Although Isle of Skye has some great components , what my friends and I noticed from playing this game a few times is that if a player is unable to score their objectives in certain rounds then it will be a bit of a challenge for players to come from behind. They really need to study the other objectives and surpass their opponents in that objective. They might even consider purchasing tiles that have scrolls, which provide end game bonuses. Otherwise they will be significantly trailing.

Isle of Skye takes the tile-laying mechanic, and adds of a whole other level of strategic gameplay to it. The pricing element really allows players to wrestle with economics and consider the concepts of supply and demand.   Overall, even though I don’t agree that the game should have won the Spiel De Jahres award, it is definitely a game worth picking up and adding to your board gaming library.

I’d like to also ask that if anybody has any comments about the 2016 Spiel De Jahres winners, please comment below. I would love to have some sort of discussion with you guys about this.