Unlike any other game I’ve seen before

When I was a kid, I read those “Choose Your Own Adventure” Books. Those ones where, depending on the decision you made, would determine which page you turn to in order to continue the story. Most of the pages are dead ends, but there is the one path that you searched for that will get you to the end of the book. So you kept reading, sometimes back tracking to a previous page when you made a mistake. You didn’t want to cheat by reading each page. You just trekked on and kept back tracking to see where you made the last error.

Now there’s a recent game that recreates a choose-your-own-adventure book. Every decision you make could affect how the game turns out. And there’s usually only one way out.

T.I.M.E. Stories is an innovative co-op game created by Manuel Rozoy. In this game you take on the role of agents for the Tachyon Insertion in Major Events Agency (or T.I.M.E Agency) who are assigned the task of time travelling and reverting some undoing that had happened back then. The base game consists of all the components that you’re going to need to run a T.I.M.E. mission, but the game only really works when you have an individual module. T.I.M.E. Stories has a starting module called “Asylum”, which takes place in the 1920s in France, but there are currently three other modules that are available. Each module follows a similar structure in the setup. You are given a mission briefing and then are transported to an area where you will have to travel to different locations to solve the mystery. You are also given a persona that you must take on throughout the entire round.

I know my review sounds very generic right now, but this is because the game is so story specific, that I don’t want to give away any spoilers.

Each location card could have a number of things. Some will give you item cards which will help or even hinder your progress in the game. Some of the cards will cause some sort of conflict with a character or part of the room, and you now must roll for whether or not you survive the conflict based on the characteristics. Other cards will contain clues that you will need to solve puzzles in the future, and some will cause you to make decisions on certain things about the game which will have consequences later on. But the one thing the game stresses is that you must communicate with your team what’s happening on the card without reading the card out loud. You are also able to freely move to any open rooms and areas on the map, but this will cost you time units, which are limited. You can also lose time units when you have some sort of encounter with a character, or when you’re moving from one location to another while being in the same room or area. If you use up all of your time 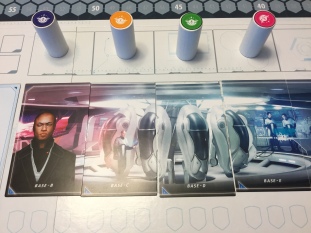 units, you will be transported back to the present day and will lose everything that you had earned in the mission.  This encourages players to be efficient in their decision making and complete their missions as opposed to dilly dallying around for random items and other encounters. In addition, players could be hurt based on the encounters with characters in the game and could even be killed off. In the end, the team will be evaluated based on their performance in completing their mission.

One of the reasons why I love this game is the amazing story telling that it does. T.I.M.E Stories paints an amazing picture for players to delve into. “Asylum” was one of the creepiest stories that our team ventured. There were many twists and turns and you didn’t know who you could trust in the game.  The writing was done with much detail and was really entertaining. However, this means that once the story ends, you essentially can’t play the game again because you would know the solution to the module. For some players, this would be a deterrent in purchasing the game. And I understand where these people are coming from. There was a man who came down to Pips one day asking about T.I.M.E. Stories. He asked, “Why would you want to buy a game that you can you only play once?”My argument is that the game has the most amazing cooperative elements and engaging story lines. In this day in age, how often do you get to sit at a table and tell stories with each other. This is why I’m starting to enjoy this “board game Renaissance”. We are now seeing games that are innovative and bring back this aspect of socialization, team work, and friendly competitiveness, and this includes T.I.M.E. Stories.

Then the same man asked, “Is this game worth buying?” I’ll admit, seventy dollars is a pretty hefty price to purchase this game so that you can only play it once. However, I don’t look at it that way. I am one of those people who is comfortable in moderating and watching other’s play the game. So I am okay when I go through the scenario just once, then reset the game and teach it to another group of people, because I get to see what their decision making and thought processes are. I now understand that feeling creators of a locked room get when they see their customers go through their labyrinth. I am excited when I watch players struggle through traps, or solve puzzles together, or successfully defeat a boss enemy because they are trying things that I didn’t do the first time around. In that aspect, the value of the game is appropriate for me. Now if you are truly worried about paying that cost, but have a group of three other friends who are willing to take on the campaign with you, consider splitting the cost. This means that you are paying only twenty dollars for an amazing game experience and ten dollars for each additional module. A movie and snacks these days costs way more than 20 dollars, and with T.I.M.E Stories, you will get an engaging game event that, if you are wanting to complete in one night, will take you about four hours. Both groups that I played with just wanted to keep going, trying to figure out what is happening in this Asylum. The story line of Asylum is so creepy and dark that you will be enthralled and engaged and lose track of time.

T.I.M.E. Stories is also innovative in its design. It belongs in the group of RPGs in a box. You take on a role of one of the characters. Each character has its own pros and cons. Certain characters are good at completing certain tasks and awful at others. The game also sets up the stories for you, so you don’t have to worry about a DM constructing the mood and tone of the mission. Regular RPGs also get overwhelming with the number of statistics and abilities that you have to consider especially when you have never played an RPG before. T.I.M.E. Stories simplifies these aspects with quick and simple gameplay, so that your focus is on the story line and puzzles and not the battles and dice rolling. And even though there isn’t a major focus on the dice rolling, you still have to be strategic and working well with your team. Otherwise you’re wasting time and resources and could be starting all over again.

The game also emphasizes on communication with each other. It is designed so that only characters that are on a certain space can read the card. As I mentioned before, players are able to paraphrase what is found on the location cards, but are encouraged to not read word-for-word what is on there. Players will never have perfect information if they want to finish the game efficiently and thus, have to rely on their teammates to understand what’s going on in the entire game. Some cards will have puzzles while others will have the clues that you will need to solve the puzzle. In order to reconstruct what is happening,  each player has to contribute their knowledge to others.

I have been tabletop gaming for a little less than a decade. I’ve mentioned in previous reviews that certain games are hybrids of other popular ones, or that games are an extension of an already seen genre. I can honestly say that I don’t think I have seen anything like T.I.M.E. Stories. It’s like an RPG game, but without all the complexity. It’s a chance game, but with major implications for failing. It’s like being in a locked room, but you can do it in the comfort of your own home. And it even has some Legacy elements in that when you find certain items they will be used for your next adventure. This game is definitely worth its value and you and your friends will have an awesome time trying to solve the mysteries that lie within each module.