School started this week, and it has been a complete blur. Honestly all I remember  was meeting parents, supposedly talking coherently to students, and running around trying to get all the photocopying done. And now I’m in Vancouver for a friends’ wedding, so I finally have a moment to just sit in bed and just start writing, and once again, I began sifting through Kickstarter, trying to find a great game that hopefully I will get a chance to play real soon, and I came up with one:

Let’s be real here. Nobody likes to take out the garbage. I have to take out the garbage in our household because between my girlfriend and I, I’m the one that’s the least grossed out with trash. But because of my laziness, I try to limit the amount of times I go out to the garbage bin. To do this, I try to strategically place the trash in such a way that it doesn’t tip over. When the trash is falling out of the can, that is the sign that I have to tie up the bag and head over to the dumpster.

Well Mayday Games has now created a game based on this aspect of my life. 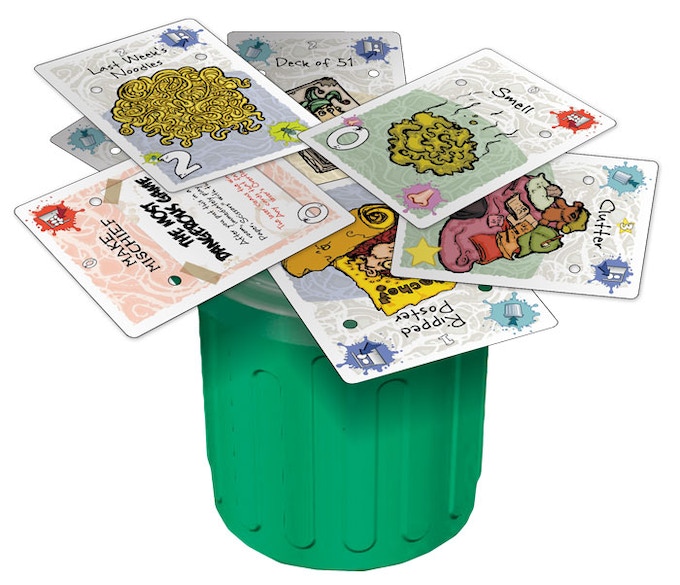 Garbage Day is a dexterity game in which players stack cards featuring images of garbage, on top of a garbage can. Each card has two holes in them and as you are playing cards on to the garbage can, you have to ensure that you can see through the open holes into open air. This means that the garbage is going to extend outwards until the entire tower of cards falls down, and that person metaphorically has to “take out the trash”.

I picked this game because it reminded me of a game I played in high school called mushroom. You take a regular bottle, a deck of cards, and you start putting cards on the neck of the bottle in such a way that one edge of the cards were exposed to the outside. It was the cheapest version of Jenga.

This game has the exact same mechanic and adds a humourous theme. Mischief cards alter the gameplay by adding additional rules to the game. And there is also an added rule where players are allowed to keep the trash in their room. Kinda like what I do when I’m also lazy in throwing out the trash.

If you like a Jenga style elimination type game with an added twist, I would highly recommended Garbage Day.